When an index such as the R*-tree, k-d-tree or LSH is added to the database, the method will run substantially faster, while this does not require any changes to the code below. We get this for free by using the kNN query functionality of ELKI.

This tutorial was developed for the KDD I class summer term 2013 and the ELKI 0.6.0 release.

We create a new class named ODIN. As base class we chose AbstractDistanceBasedAlgorithm, and implementing the OutlierAlgorithm interface forces us to use the result type OutlierResult. The full stub looks like this:

The generics were set “agnostic” - so O can be anything; whatever our distance function supports.

The logger is the usual private static final logging reference:

this allows the super class to correctly log using our algorithms name.

First of all, we will be modifing the constructor: we know we are going to need a parameter k, and we will make the constructor public. Note that the super class already takes care of the distance function.

Again, the “optimal” signature of the run method cannot be automatically determined by eclipse: some algorithms need multiple relations, for example. The signature that we have to implement is determined by the type information we just gave: it constists of a Database and one Relation for each type we requested. Since we requested a single type, compatible with out distance function, it will be a relation Relation<O>:

Our algorithm is based on the k nearest neighbors. Since this is an operation that can be accelerated well by a database, we will get a nearest neighbor query from the database, for our relation and distance function. Essentially, we bind the abstract distance query to a database, and then get a nearest neighbor search for this distance. At this point, ELKI will automatically choose the most appropriate kNN query class. If there exist an appropriate index for our distance function (not every index can accelerate every distance!), it will automatically be used here.

Secondly, we need to know the objects we will analyze and setup our output data store:

the best way to think of the scores is a Map<DBID, Double> - except that it will be much more efficient. The hints are meant to allow the database to better decide which data structure to choose, and whether to keep the data in memory or save it to disk. Since these will be the output scores, we give the hint indicating that the values should go to the database: HINT_DB

Now we can process each object in the data set using an iterator:

For each object, we will acquire the k nearest neighbors (which will be accelerated if our database has e.g. an R-tree index) and then iterate of the neighbors, too:

For each of the neighbors, we increase the in-degree (=score) by one. We could have used integers, but doubles will be reliable enough, and postprocessing algorithms will expect double scores anyway. Note that we use DBIDUtil.equal to check whether the object is its own neighbor: in a database context, a kNN search will usually return the query object with a distance of 0! We must not use ==: the two iterators obviously are not identical. However, they may reference the same object, which is conveniently tested by DBIDUtil.equal.

The getKNNForDBID method may boil down to a slow linear scan, but when the database has an appropriate index, the index query will be used. Then the algorithm can run in O(n k log n) or even O(n k) time.

Last but not least, we have to return our result for evaluation, visualization and post-processing. For this we need to provide some meta data on the value range and meaning of our score: minimum and maximum, but also that for this algorithm, low values indicate outlierness. We then wrap the data store in a relation and return the result (the two name strings of the relation will be used in the menus and output file names.)

Parameterizers in ELKI serve the purpose of connecting the UIs (both the command line and the graphical UIs) to the Java classes. Here, there are two parameters to set: the distance function and k.

We can inherit the distance function from the Parameterizer of the super class, which yields the following code to start with:

We now need to add a Parameter for k. We need a static OptionID, which consists of the parameter name and a description, and a Java variable to store the value in.

Now we can “get” the parameter in the makeOptions method:

we keep the super method invokation, as this is where the distance function parameter is being set. For the k parameter, we use an IntParameter. Furthermore we add the constraint that k must be at least 2: in a database, the query object will be its own nearest neighbor! config.grab(param) will try to set the parameter, and when successful we can access its value. If the parameter was not set, config will keep track of the error. We do not want to throw an exception here - instead, all errors should be reported to the config object, so they can all be reported at once.

Now we have the distance function and k and can instantiate our class in the makeInstance method:

We can now launch the GUI (or use the command line) to test our algorithm. We need to specify the k parameter (the distance function will default to Euclidean distance) and choose a data set. With our favorite “mouse” example and -odin.k 10, we get automatic visualization via a bubble plot: 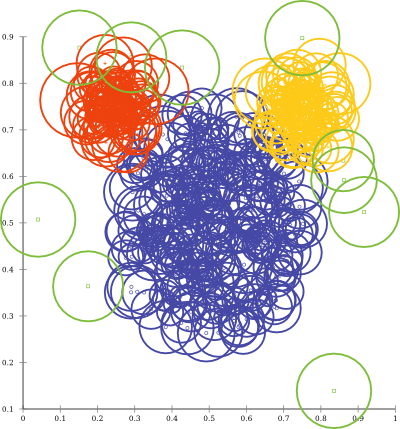 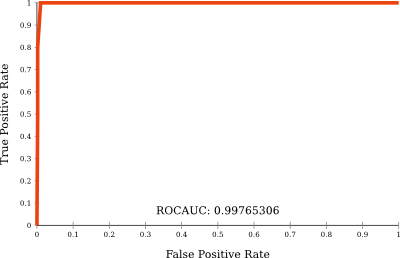 While the bubble plot is quite a mess (because the ODIN method does not return calibrated scores), we can see that the green bubbles are larger than e.g. the blue ones. The ROC plot shows us that the resulting outlier ranking is actually pretty good - almost 1.0!

We can actually improve above visualization quite easily, by providing additional metadata. We need to change a single line:

the three additional values we added are: theoretical minimum (obviously, ODIN scores can become 0), theoretical maximum (every other object - so ids.size() - 1) and a baseline value. The baseline value is most helpful here: if we set this to the expected value for regular objects, these will be scaled to have no outlier bubble. A naive expectation is that each object will have as many in-links as it has out-links, i.e. k.

With this slight modification, the automatic visualization can produce a clearly more useful result: 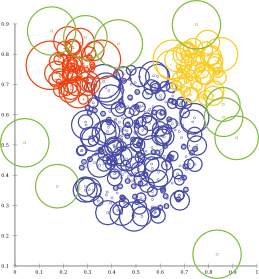 We can now tell that apparently the leftmost red objects is ranked worse than the green one just above the red cluster; this is why ODIN did not score perfect on this data set.

In order to document who came up with the idea of this algorithm, we are going to attach a scientific reference to the method. It will then show up in the documentation. For the Wiki, we put this on the page RelatedPublications.

To the class definition, we will add the following Java annotation:

We also put the same information into the JavaDoc of the class. This makes it easier for people finding the appropriate scientific background of the algorithm that we just implemented. We should also make a note that we modified their algorithm slightly: instead of using a threshold, we “curried” the method and return the threshold at which the point would become an outlier as score.

You can browse the full source code online, in the tutorial folder